Now January is in full swing and it’s probably a bit too late to wish you ‘Happy New Year’, but I will do anyway. I only really got blogging regularly during the last quarter of 2011 and, because of that, missed out on writing about a lot of my adventures. In this digital age of mobile technology, I like to keep a record of the good things that happen in my life with photos, which are all dotted around on my various social media profiles. However, they are not available all in one place to tell my story of 2011… Until now!

A picture can say more than a thousand words, as they say, so I’m going to give it a go. I’ve had chance to reflect a lot over my highlights of the year 2011 and I will present them to you in three categories, all of which are very important to my life. Firstly, there’s my hobby that I adore: radio. Then there’s all my work in the television industry, a job that I am incredibly grateful to have the opportunity to do. As well as music; I would go as far to say that music provides the foundation to what all the great experiences in my life are built on. I love it and have been very lucky to see some awesome live gigs this year.

2011 started out brilliant for me and my radio work as I won the award for Pure 107.8 FM ‘Best New Volunteer Award’ and ‘The Basement’ show that I present / produce also won Pure’s ‘Best Total Access Community Show’ award. A great night was had all both during and after the party had finished! Here I am on the front row with the rest of the Basement team celebrating our successes: 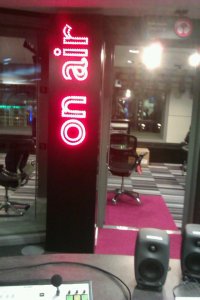 A great start to the year that just kept getting better and better. 2011 was the year of great change for the BBC sector of the radio industry. With the focus on creating a less ‘London-centric’ feel to their output, MediaCityUK, was finally opened. Before this my local station BBC Radio Manchester was based at New Broadcasting House on Oxford Road in Manchester. Even though the building was tired and old it had lovely nostalgic nuances to it. I have had some great memories in there; it is where I started my broadcasting career when I had work experience years ago while at university. As well as where I received my valuable radio training in 2011. In October  it was all systems go; the BBC had started to move into their new Media City home in Salford Quays. As a Radio Academy member I was lucky enough to one of the first to take a look around the Quay house building. 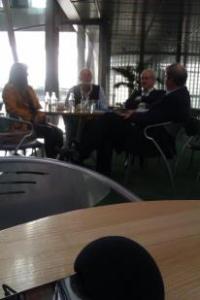 Attending my first ever Radio Festival was a huge highlight for me, an experience I will never forget. I blogged about it all extensively at the time so if you want to read all about it then scroll down to the relevant post HERE. It was a great privilege to be surrounded by so many talented people including some of the more famous faces. Just to whet your appetite for my Radio Festival blogs, here’s an exclusive photo that I didn’t post at the time. It’s the legendary Bob Harris, who I was sat opposite in the Lowry restaurant! (You can see my audio recorder in the foreground too.)

The freelance nature of working in television production is not an easy one. However, it is filled with facets that some people can only dream about. For example, during 2011 I was walking down the Coronation Street set one week and above the Emmerdale Woolpack set the next. Some people enter competitions to get the chance to do just that yet I was getting paid to work on it – amazing! I do appreciate how fortunate I am.

I started out the year working in ‘Calendar-land’ at ITV Yorkshire: 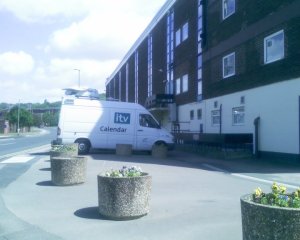 I would continue to take part in various projects at ITV’s base in Leeds during the year, but for the majority of 2011 my work was for productions being made by ITV Granada in Manchester. I worked on many different programmes in lots of different capacities, including:

Particular moments of the year that stand out for me include getting lost down a single track lane in Conwy, Wales. We were on route to film a fabulously enchanting 1-up, 1-down house and pottery workshop for series 2 of May the Best House Win. Unfortunately, that particular house didn’t make it into the final episode cut but it felt like we were in a Disney film while we were there!

Another experience that perhaps isn’t as glamorous but is a typical ‘Runner’s story’ for you now. I was the runner with responsibility for Granada’s studio 6 when working on the ‘Guess the Star’ pilot – otherwise known as the Jeremy Kyle studio. I had just got all the crew their lunches… apart from one where the box hadn’t been closed properly. No, this couldn’t have been sandwiches could it? Oh no, this was runny beef curry that had left a trail all across the floor, as well as on myself! Not the most attractive look when you’re stood next to the Coronation cast looking perfect after just coming out of make up! Sod’s law strikes again in that it was me who made a mess of Jeremy Kyle’s studio floor. (Not many people can say that though, I suppose!) Instead of wait for the cleaners I thought I better clear it up… all while Lee Ryan from boyband Blue was talking me. That was definitely my most surreal experience of 2011!