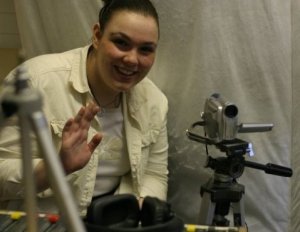 I am an experienced and versatile journalist living in Cumbria. I’m originally from Stockport near Manchester. My training took place in Preston and I have worked all over the North West. The majority of my career, spanning over a decade, has been based in Lancashire.

I’m currently a journalist for BBC Radio Cumbria, which includes producing programmes, reading news bulletins and reporting. I’ve covered for the news editor as well as filmed and edited videos for social media. I am interested in diversity and inclusion and am part of BBC England’s ‘Diversity Action Group’ for the north.

My previous role at BBC Radio Lancashire was producing Brett Davison or Gary Hickson at teatime, sourcing and reporting on stories as well as studio producing the programme while on-air. I also regularly read news and sport bulletins for the station, both for breakast and drivetime.

I presented programmes on the station, including a documentary. I have also been a reporter on BBC News online’s Local Live newsfeed.

I spent four years as a Saturday traffic and travel broadcaster on BBC and commercial radio stations across the North of England at the INRIX media hub in Altrincham. My regular stations were BBC Radio Manchester, Merseyside, York, Cumbria and Yorkshire Coast Radio.

As a reporter, stations I’ve worked on include BBC Radio Manchester, Smooth Radio and Real Radio. As well as a been a planner for BBC North West Tonight.

At Stockport’s Pure 107.8 FM, I was part of the team who presented and produced youth show ‘The Basement’. I went on to present the ‘Chilled Pure’ programme weekdays from midnight.

I started my broadcasting career at the University of Manchester’s student radio station Fuse FM, where I was involved in a variety of on-air and off-air roles, including as the station’s Head of Marketing.

After my first undergraduate degree in English Language, Linguistics and Film Studies (combined studies), I freelanced at ITV Studios in Manchester (Granada) and Leeds (Yorkshire TV) as a runner / logger on factual and entertainment programmes – before going back to university as a post-grad student to re-train as a broadcast journalist.

I’m a member of the National Union of Journalists (NUJ) and accredited by the Broadcast Journalism Training Council (BJTC), having graduated from the University of Central Lancashire (UCLan) with an MA with Merit in Broadcast Journalism. I achieved a distinction for a documentary that I produced and presented.