Are journalists public enemy number one? 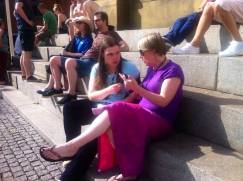 There are some professions that set eyes rolling when you mention them: traffic wardens, tax inspectors… journalists?? Yes, in my experience, all of the above apply.When people ask me what my job is – I’m proud to say I’m a journalist! Now I’ve finished  my training, I’ve been working in broadcast newsrooms across the North West. It’s been a learning curve to see the general reactions when I’m out on the road roving reporting.

I love the variety of my job – everyday is different! However, I’ve noticed a pattern that often emerges; I could be chatting to an interviewee as normal, but as soon as my recording equipment is switched on their whole demeanor changes. Some will become tense, sweat beads start forming on their brow and they become fidgety. Now, to a journalist, this gives off non-verbal signals that something’s not right.

When this sort of anxious reaction happens, I get the feeling a lot of people think I’m there to catch them out – but there’s no trick questions on my list. ‘Reporter’, does what it says on the tin; we want to report on what is happening for the story we are covering. Of course, I will ask interviewees challenging questions, when necessary – but if interviewees have nothing to hide then they have nothing to worry about, surely?

Maybe I’m over analysing, because I’m so comfortable in front of microphones and cameras. Sometimes, I need to take a reality check and realise that not everybody is like me. These could be nervous reactions from people who are not used to media attention. It doesn’t explain press officers who become incredibly controlling though. In fact, that just makes me want to find out even more what they might be trying to hide…

It would seem some people are sceptical of us, rather than the other way around. Recently, I had been questioning someone about facts and figures – quite a routine interview. This was a very hot day and I hadn’t been drinking enough water. Sod’s law being what it is, I started having a coughing fit during the interview. I was behind the camera and managed to muffle any kind of noise; no one watching would have known any different – but I must have been pulling some funny faces! The guy accused me of “trying to put him off”. I would never knowingly do that. It just shows how defensive some people can be.

I think events leading to the Leveson inquiry hasn’t helped the image of journalism – but it’s important to remember that inquiry was about print journalism NOT broadcast. The mediums are different; firstly, we are regulated by the Ofcom code. Secondly, there is no agenda; there’s not a weighted political bias in broadcast journalism. We have to report stories objectively, fully attributing quotes.

Attribution is easy to do on radio and TV because you will see or hear the person saying it or it will be quoted directly. Misrepresentation is unethical and it’s hard for broadcast journalists to misrepresent someone – because proof of what was said will be on a recording.

Journalists are searching for the truth, by asking the questions that the public want – and deserve – to know the answers to. We investigate and we we hold people in positions of authority to account. Just think what might be going on in the world without journalists? Having said that, not every interview I do needs to be an interrogation… if the interviewee has nothing to hide.

Broadcast journalists are not to the enemy. In fact, maybe any interviewee who thinks we are should try looking in the mirror?