← The commercial radio ‘vampire’ takes a bite…
Global vs GMG – not such a ‘Smooth’ takeover? →

It’ll be alright on the night

Whether on radio or television, in broadcasting there’s a risk something might go wrong; it’s part of the excitement that keeps us on our toes. In every job I’ve had ‘health & safety’ is always first on the agenda and usually greeted with lots of eye rolling! Risk assessments can seem more of a burden than a necessity but last week I found first-hand just how important they are.

We’re familiar with blooper clips shows where a reporter is presenting a piece to camera and members of the public are larking around behind them. I’d been warned to have my wits about me in this situation, but it was still a shock to be attacked from a behind by gang of youths while filming in central Manchester.

As a journalist, presenting a piece to camera is a time when you are at your most vulnerable – I’d memorised my script and was concentrating on getting the delivery right. I was aware there was ‘action’ going on behind me because actuality makes a good background to a shot but when watching the footage back I could see how quickly the attack unfolded. A gang of about six teenagers had spotted our camera and started to make a beeline for me. Initially, it felt like I’d been punched in the head but it looks like I was hit with a rolled up magazine. 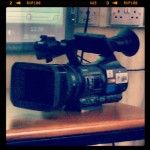 Unfortunately, this type of occurrence is not uncommon; camera operators will have all sorts of horror stories about being attacked while doing their jobs. Big broadcast cameras take great pictures but are conspicuous and instantly make you a target by drawing attention to what you’re doing. This can be an advantage of course, people will approach to chat about what you’re filming but it’s important to be aware of the negative type of attention that can cause people to behave strangely or aggressively.

After the Leveson inquiry there seems to be a lack of respect for journalists somewhat but it’s important not to generalise everyone. I got into journalism to promote the good of society and expose the bad. Presenting to camera is a time a reporter needs to be natural rather than worrying it may provoke an assault.

What I love about broadcasting is meeting people and I have certainly met all kinds during my last few assignments(!) The majority of members of the public are lovely people and we mustn’t let the minority of attention-seeking yobs overshadow that. I have a bit of trepidation about filming my next report, I suppose the confidence has quite literally been knocked out of me. However, I know how important it is to get back on the horse and ride it. Or in my case – get out there and film it. Onwards and upwards!

“They who turn and run away live to write another day.”

Health and Safety advice from the Chartered Institute of Journalists.

Posted on November 25, 2012, in Journalism and tagged broadcast, Leveson. Bookmark the permalink. 2 Comments.

← The commercial radio ‘vampire’ takes a bite…
Global vs GMG – not such a ‘Smooth’ takeover? →